We are lucky at 40 on Ilkey B&B to have Crested Barbets nesting in the garden and you can often hear their distinct
call or see them hopping around the grass and drinking from the water fountain.

Nicknamed God’s Paintbrush or the Rainbird, this colourful little bird calls shrilly to herald rainy weather. The Crested Barbet is a handsome bird with a yellow and red speckled face, and a yellow head crowned by a small black crest. A dramatic black band around its neck offsets a yellow belly peppered with red. Its black and white body is tipped with red feathers.

Crested Barbets are usually found singly or in pairs, hopping on the ground in search of food. They tend to fly only short distances and are found in habitats as diverse as forests, savannah, woodland thickets, watercourses and even suburban gardens. Their diet includes insects, fruit and other birds’ eggs.

Other Birds at 40 on Ilkey B&B
Nesting on the patio, we have Greater Striped Swallows (Hirundo abyssinica unitatis). In African folklore it is believed that
swallows will only nest where there is a lot of love and peace.

For us at 40 on Ilkey B&B, this is a great testimonial to our hospitality!

According to some accounts, the name bush baby comes from either from the animals’ cries, or their appearance. The South African Afrikaans name “nagapie” (little night monkey), comes from the fact that they are almost exclusively seen at night. Bush babies are agile leapers and run swiftly along branches. At night you can sometimes hear their clicking noises.

They have large eyes that give them good night vision, strong hind limbs, acute hearing, and long tails that help them balance. Their diet is a mixture of insects and other small animals, fruit, and tree gums.

Bush babies are very inquisitive and have been seen to eavesdrop on private conversations on the patio. It seems strange to see these little mammals in a garden in the middle of the bustling city of Pretoria, but a sighting never ceases to thrill the audience.  Bush babies poses no threat to humans as they are not invasive and not destructive. 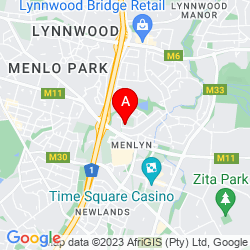